A local agronomist that I often turn to for agronomic insight states the following pertaining to crop conditions, “it is seldom as good as it looks and it is seldom as bad as it looks”.  I mentioned to him a couple of weeks ago that I felt we may have the best looking crops I have ever seen for this time of the year.  I could tell from his reaction that I was in for a surprise.  He agreed that our crops are off to a great start, but he explained that he had seen plant concerns that we needed to remain mindful of.  He knew these concerns would show at some point this year.

Our 2018 cropping weather has been erratic, which has contributed to our current concerns.  An old saying is, “extremes lead to extremes”, which appropriately describes the spring of 2018.  What began locally as one of the coldest and dampest spring periods on record, suddenly turned excessively hot and dry.  Many local farmers were able to plant all of their corn and soybeans without a rain out, which is rare.  We have remained excessively hot, but we’ve now had some excessive rainfall events.  Our crops were looking great at 55 mph.  June 17, I noticed a field of soybeans that had looked excellent all spring, but now was yellowing in many areas; even on the slopes.  That was a concern.  The extreme heat on the 18th further accentuated the concern with pockets where water had stood from excessive rainfall appearing to be nearly dead and slopes continuing to yellow further.

Soybean Yellowing:  There appear to be several concerns leading to yellowing of our soybean plants.  Parts of Illinois have a head-start on our local soybeans, so we’ll reference findings from Illinois that our local agronomist shared with me that likely also impact EC Indiana.

Our local agronomist shared that Rhizoctonia often starts out as a seedling blight under hot, dry conditions with a brick-red color and weakens plants by girdling the stem.   Plants usually survive as long as they aren’t completely girdled by the lesions that move up from soil surface.   The other diseases came in after Rhizoctonia’s initial damage in that part of Illinois.  He believes this could well be part of what’s happening here. Our soybean concerns could negatively impact our yield, but it’s still early. 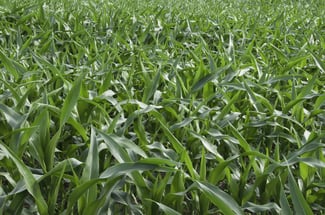 Corn Concerns:  The primary corn concern locally relates to corn emergence.  The fields where farmers took the time to ensure their seed placement was consistently at the proper depth by properly adjusting their planter down pressure as soil conditions changed had more consistent emergence.  Fields where proper seed placement was not properly managed can still be seen today, even with the height of our corn.  This will likely affect corn production.