A Wall Street Journal article talked about the “wave of bankruptcies sweeping the U. S. Farm Belt as trade disputes add pain to the low commodity prices that have been grinding down American farmers for years”. This article documents the highest Chapter 12 filing levels in ten years. On ABC This Week, Heidi Heitkamp stated “We have record bankruptcies in farming country.” 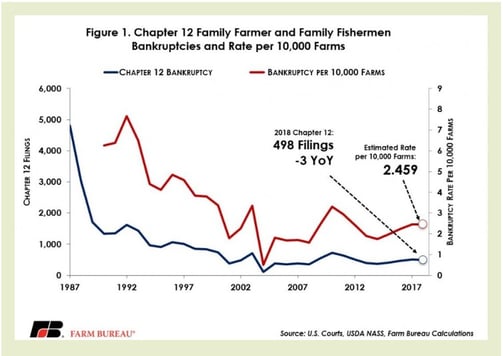 Do we really have record bankruptcies in farming country? Let’s talk about Chapter 12 bankruptcy filings in the U.S. Chapter 12 is exclusively reserved for farmers and fishermen so it is easier than typical bankruptcies to track.

Caseload records from the United States Courts show that Chapter 12 filings in 2018 totaled 498 nationally. This is down 1% from 2017 when there were 501 filings. The highest level of Chapter 12 filings came in 1987 as shown on the chart. Therefore, we do not have a record number of bankruptcies filed by U.S. farmers.

While national rates are down, parts of the country are experiencing higher rates of bankruptcies. For example, there were 223 filings in the Midwest in 2018, up 19% from 2017. This image shows the change in filings for each state. 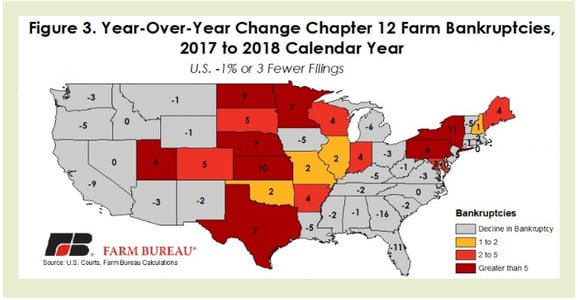 Higher bankruptcies in the grain producing states reflect poor commodity prices and lower earnings and there isn’t a lot of good news on the horizon. According to the American Farm Bureau, farm debt is at near or record highs, the debt-to-asset ratio has climbed for six consecutive years and farm debt as a proportion of annual farm income is at 97%, which is a 32 year high.

There are alternatives to consider before filing bankruptcy. Some farmers have chosen to liquidate assets such as non-essential equipment or even selling some land to reduce debt. A successful Chapter 12 bankruptcy may allow a farmer to keep some assets and continue his farm operation in some manner.

Halderman has experience working with these situations. We’ve served as receivers, helped liquidate assets, and conducted appraisals. We also have investors looking to buy land with lease back opportunities so the farmer might continue to operate.
Contact your Halderman representative today to learn how Halderman Can Help!