It’s hard to predict how much farm equipment will sell in a year. Unlike land, people seem to be hanging onto their equipment, and for good reason.

“Used farm equipment is being held pretty tightly because acquiring new equipment is so hard, and takes so long, to get,” said Rusty Harmeyer who’s a Real Estate Agent and Auctioneer for Halderman. “Even if someone orders a new combine, they aren’t willing to sell their old one until the new one arrives because they don’t know when that will be.”

Similar to the empty car sales lots, new farm equipment isn’t being built at a fast pace. There are several contributing factors to this supply-chain deficit.

“A lot of people talk about how it’s an issue with the supply, but I don’t think it’s just one item,” Harmeyer said. “I think it has to do with a labor shortage as well. Equipment manufacturers are struggling to get raw products and high-end electronics, but then when they do get them, they don’t have as many people on the assembly line to put everything together.”

With a less-than-stable economy, it shouldn’t be surprising that manufacturers are leery of building an entire fleet of high-dollar equipment. They’re worried about being able to move that equipment should the bottom drop out of the farm economy. 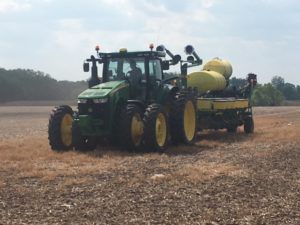 “Those manufacturers don’t want to have to sell that equipment at a loss, so they’re doing more of a build-it-as-you-order type of deal,” Harmeyer said.

For anyone with used farm equipment they need to move, the outlook is glaringly bright. Inflation plays a key role in the ability to realize well above the original purchase price on used equipment in many instances.

“The demand for good, late model, lower hour equipment is extremely strong across the board,” Harmeyer said. “The cost to build equipment has risen significantly in the last five years. For example, we sold a John Deere Gator recently. It was five years old and it was purchased brand new for $12,000. The same type of Gator costs around $20,000 now. We sold the 5-year-old Gator, with 165 miles on it, for $13,500.”

Reliable farm equipment can make or break an operation. If you’ve been hanging onto excess equipment, now’s the time to put them up for sale. Take advantage of this seller’s market!

For the last 10 years, Halderman has made the buying and selling process significantly easier. Read more about how they’ve made it easier than ever to list and sell your farmland and equipment, here.