A flex cash lease design combines the best parts of a fixed cash rent lease and a crop share lease. This hybrid takes the perk of a fixed income and combines it with flexibility on the increased revenue side of the equation.

With a fixed lease, the rent is usually set around the market value, and it doesn’t change regardless of the profits or losses on that property in a given year. In contrast, a crop share lease splits the cost of inputs, to some degree, between the owner and operator, and then later, the revenue on that land is also divided.

“The fixed component of the flex lease comes from the base rent,” Langemeier said. “The example I use is 90 percent, meaning base rent will be 90 percent of the fixed rent market value. Where it gets complicated is establishing a threshold for when the gross revenue is shared between owner and operator.”

As the associate director of the Center for Commercial Agriculture and a professor in Purdue’s economics department, Langemeier has extensively written about all three types of leases.

“In a good year, both the owner and operator do well because of the extra revenue over that threshold,” he explained. “It’s a great combo because it has the floor, which is attractive to the owner, while also providing an opportunity for what could be considered an end-of-year bonus when that land does well.” 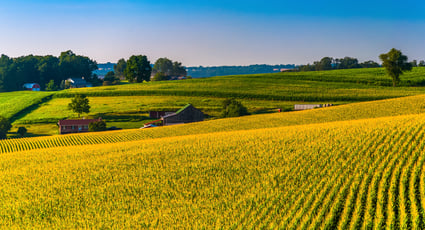 “It’s logical to me to set a threshold based on the cost of production,” Langemeier said. “That part is difficult, but it’s even harder to define yield and price when you have no idea what will happen in the upcoming year.”

Simplicity is key when computing a threshold. A lot can be lost in translation between owners and operators, so finding trackable numbers helps eliminate that issue.

“Yield needs some kind of validation, which could be something like crop insurance records,” Langemeier said. “Price is a little more difficult, but there are some options. One of those could be using a price at a specific elevator the first two weeks of December, or something like the example.”

While there are a few options for online tools to help with this number crunching, it’s still important to fully understand the inputs and outputs of that equation. (Here’s a link to a calculator from the University of Nebraska – Lincoln)

“The key is to keep it simple, and if a tool allows you to do that, then more power to it,” Langemeier said. “You must ensure that both the owner and operator easily obtain prices.”

Halderman uses cash flex leases on hundreds of farms. The crop price is typically established using an average of cash prices offered for the current year’s crop at a local elevator or grain merchandiser. Some use the first trading day of the month for 6 months or 10 months, or maybe all twelve.

Crop share leases used to rule the market but have steadily declined in popularity. In its place, both flex cash and fixed cash leases have taken the top spots. They are simpler for the farm operator to manage, easier for off-farm owners to understand, and, if constructed well, manage the risk and reward for the owner and operator fairly.

Weather plays a significant role in what type of lease makes the most sense for every situation. Langemeier said the eastern corn belt uses the flex cash lease more so than the western half of the region.

If Langemeier had to choose a word for 2023 to represent the entirety of crop production, he would use: uncertain. That’s especially about prices. He chuckles as he adds, “that’s true about every year.”

If producers learned anything in the last 5 years, it’s that the only thing you can expect is the unexpected. That is part of why 2023 is shaping up to be a promising year for those who chose a flex cash lease.

“These leases increase your chance of getting a bonus because there’s protection on the low side, and all the risk is on the high side,” Langemeier said. “This year is set up quite nicely for flex leases, along with the last two.”