Even though land values continue setting new records, buyer turnout remains consistent in the second half of 2022.

According to Purdue University, between July 2021 and July 2022, land values increased, on average, by more than 30% according to Pat Karst, Halderman vice president.

Why do you think land prices are continuing to remain strong and even increase?

“Halderman auction results show land values are up by about 39%, which is consistent with what a lot of other people are seeing currently,” Karst said. “That number is astounding. I’ve never seen land values rise at this rate.”

While a great sale used to bring $12,000 to $13,000 per acre, that’s now commonplace. Ground that sells for $18,000 an acre is what Karst considers an incredible sale and that number used to be unheard of just a few months ago.

Karst believes there are two main factors driving an agricultural economy that can support this:

“Even though commodities are high, they started to show signs of declining,” he explained. “Most people are still able to operate at a profit. Like always, some people are still worried about what it will cost to raise their crops next year.”

“We notice more demand for ag land outside the industry,” Karst said. “We have investors coming in from urban areas like Chicago, Cincinnati, and Indianapolis. They are in the market in a big way. These are not necessarily large corporate investors. Many are individuals looking to add farmland or increase the amount of land in their portfolio.”

Inflation has proven to be a strong driver behind land values as well as demand.“Historically, ag land has had a strong correlation with inflation,” Karst said. “Land does well in times of high inflation. You can probably say that about all real estate.”

Dips in the stock market have prompted people to look elsewhere for investments, leading them to farmland. 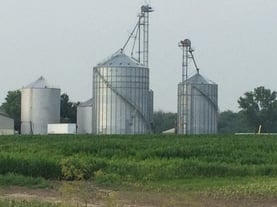 “It’s slow and steady on the cash return, but it’s a safe investment,” Karst said. “Investors like a local businessman or the doctor in town want to put their money to work outside of stocks and bonds; into something that will hold its value through inflation.”

Has the conflict in Ukraine reached Indiana?

Without knowing if Russia or Ukraine will export typical amounts of grain, nobody knows if their customers have enough or if they’ll be looking for other sources. If those customers need new sources of grain, Karst said South and North America will most likely step up to that plate. However, there’s no way of knowing if that need will come up.

“It’s certainly an interesting situation that we’re in that has nothing to do with our land values except solidifying that it’s a safe investment during turbulent times,” he added.

What do you think will happen next quarter (October – December)?

“There is a lot of land to be sold in the next three months. We have quite a few auctions already scheduled,” Karst said. “I expect high prices to continue through the end of the year.”

Even though new investors continue to enter the farmland market, 75% of the farms Halderman sells are staying in production with owner-operators.

“I foresee new investors entering the market this winter and even if they don’t buy land, they do help push land values upward,” Karst said. “People ask if the increase in interest rates lowered demand or affected price. Demand is still very strong despite the interest rate increase.

“If land prices decline in 2023, we aren’t going to see a dramatic drop in prices like we did in the 80s.” In the 80s, interest rates were between 16 and 18% when the market crashed. That’s not all the case today. “Now, we’re at 7%, which is nearing the historic average,” Karst said. “We’ve been so low for so long that people got used to it but now we’re getting into the normal range.”