What was unique about this first quarter?

“We’ve been doing online auctions for 10 years now. That was 7 years before COVID hit and buyers and sellers weren’t convinced people were comfortable doing that. We had stray online bids every once in a while but nothing serious.”

COVID helped speed up the adoption rate of online auctions for both buyers and sellers. When the pandemic hit in March 2020, Halderman had only 4 online auctions scheduled for the month of April. That number jumped to 10 when state and federal protocols required it.

“I went back and analyzed the data and there were no statistical differences between prices from online and live auctions. Now in the first quarter of 2022, 70% of our sales have all been online. Now almost every live auction has bidders online.”

The biggest hurdle for adoption was getting users comfortable with the technology and having fast, reliable internet in these rural areas.

“Buyers are learning to trust the process and technology for the online auctions and the sellers also really like it. Sellers don’t necessarily want to sit in a room and watch their farm, or their family’s farm, sell. It can be emotional for them, and online auctions help curb that.”

Karst said he’s amazed at how many people buy large equipment and machinery through online auctions sight unseen. With the rapidly growing real estate market, buyers are doing this with houses more frequently but it’s still uncommon for farmland sales.

For the last 6 months, supply has remained steadily high. Some farm sellers are telling Karst they wish they would’ve sold in 2013 when land prices last peaked. They’re selling now so they don’t miss that for a second time. 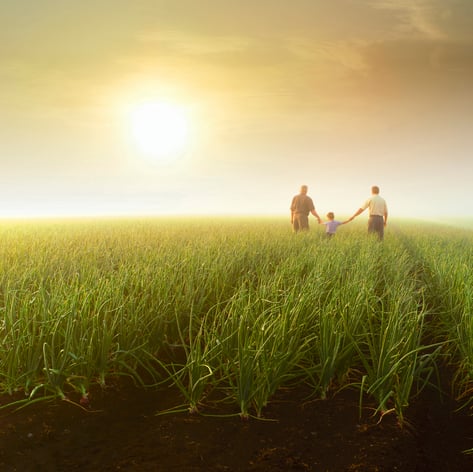 “We are selling a lot of farms for people who are at retirement age. They’re ready to liquidate the farm and use that for retirement. And then there are people looking to pass their assets on to the next generation but want to simplify that process. It’s a lot easier to divide cash among multiple siblings. They’re just doing some wise estate planning in my opinion.”

Who’s buying all this farmland at historically high prices?

“Typically, our buyers are 75% farmers and 25% investors. It’s not usually large investment buyers, they’re more local individuals who want to buy 40 acres or something like that.”

In the last 2 years, Halderman has seen the split between farmers and investors with the number paddles split 50/50 during the first quarter of the year. Most of their private sales will mostly boast farmers on the buying side.

“I think people are looking at high inflation rates and they want to hedge against that and real estate has historically been a smart investment. Farmland is very stable and won’t devalue as inflation rises.”

What have some of your sales looked like so far?

“That was a really interesting sale from a lot of aspects. We got a blizzard the day of the sale, so for only the second time in our history, we had to cancel due to weather. We postponed it to February and then had an ice storm that night after the sale.”

The live event was packed with more than 200 bidders in the room and lots of active bidding online. The expectation was to test the waters of selling the very best pieces of land for $15,000 an acre, but the buyers drove the price up to over $18,000.

“The farm brought 60% more than what Halderman and the owners thought it would. It was an interesting study in how auctions work and people’s thought process when land like that is for sale.”

Will these high prices be sticking around?

Despite rising input costs, average earnings are high which will continue to drive the land prices upward.

Something to chew on:

“Last week the Indiana Senate passed and signed bill 388. It outlawed the ownership of cropland in Indiana for anyone that isn’t a U.S. citizen.”

The new bill makes Indiana one of only 10 states that keeps non-U.S. citizens from owning cropland. There is, however, no restriction on how much livestock a foreign entity can own in the state.

“The reason behind the bill is to keep Russian and Chinese influence out of our food prices. But it could also affect the way people are doing business on a regular basis.”